Our first adventure to Operation Nighthawk (8-9th August 2015) as Victor Troop with only two scouts who had previously participated.  After plenty of planning and packing our intrepid scouts headed west to the Darling Downs Region to the Clifton Airfield for Operation Nighthawk 2015.  This year we entered two patrols (Penguin & Panther) who were supported by Hawkeye, Komodo, Falcon, Emu, Cobra and Adam’s parents (Lisa & Andrew).

After setting up camp and opening parade our scouts headed back to our campsite.  We had a quick turnaround for dinner (chicken pasta casserole) and bundled our scouts into their warm clothes before an early start time of 5.45pm.  The sun setting across the site was really amazing.

For the leaders and parents it was then an evening of relaxing around the fires and catching up with leaders from other troops and perhaps a spot of badge collecting.

For the kids it was an amazing hike through the Darling Downs countryside around the Clifton Airfield.  Navigating their way through the dark and cold (temperature dropped below zero early in the morning) to work as a team and complete the various activity bases.

I’m extremely proud of the efforts of both patrols and the support they gave each other.  It was hard on our PLs (one of whom is 13 and one 12.5) but everyone helped out.

I am especially proud of Panther patrol (nick named the temporary broken patrol) who battled through with Joseph who’d been sick with a throat infection, and Laura with a broken upper arm (still in sling), Mike with a re-injured broken finger and two 10.5 year old scouts none of whom would even consider not participating and one of whom we had to do a safety action plan with the Operation Nighthawk team (Thanks to Peter Twyford aka Wombat from Darling Downs Region team) and the orthopaedic surgeon who Laura the all clear to go! Well done especially to Rodhana, Adam & Ellie for helping your team mates through and making it to the end.  Your leadership and caring natures were shining bright.

Also proud of Penguin patrol who had a very young group of scouts (only 2/8 over the age of 12).  You worked had together to with a few scouts under the weather as well.

Both patrols arrived back at camp after about 6hrs out on the course completing the 12km hike and all bases.  I’m not sure how much sleep everyone got as the temperature dropped below zero.  Maybe next year we’ll have some more blankets and tent warming gear. Oh and we might need an ice breaker after the washing up water froze too!

With the sun rising fast we headed to closing parade before making the trek home with a brief stop at Maccas for some lunch! 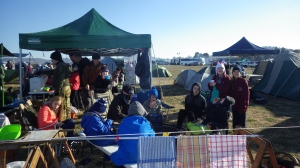