As we have had so many new scouts starting recently we had a den camp to prepare for the District Standards Camp next weekend.

Breakfast is an important meal.  Some of our newest scouts were very keen to test out our fabulous new stove (yes not really camp conditions cooking but we had to eat before setting up camp officially).  Pancakes were great and were devoured very rapidly.  The girls learned a lot about the art of pancake making too!

We learned how to pitch a Queenslander patrol tent, kitchen fly, set up an kitchen area, practise our cooking and hygiene skills.  There were games of capture the flag in the park, building of flag poles, gateways and chariot races.

Firstly there was some planning. 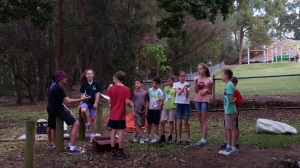 Then it was time for some gadget construction.  Koalas tested out their gateway and hung their pirate flag “aka Patrick” atop as patrol flags are still in production!

There were also so fantastic constructions made – it’s what happens when you leave scouts with a pile of construction timbers, ropes, pegs and time on their hands!  Tom made a bridge to cross the ditch that Cobra tested out.

The scouts also worked together to do some tree prussiking (thanks to Agoonoree climbing team for teaching them this).

They also used a little initiative and modified and anchorage method to raise a chariot as a platform.  Teamwork was brilliant, much testing of knots, lashings & safety (ie no higher than 1.5m).  It was amazing to watch and the kids had fun!

We also started off the scout section group shirts by spending a couple of hours tie dying and are excited to see how these turned out – we will be a colourful bunch at District Camp no doubt. 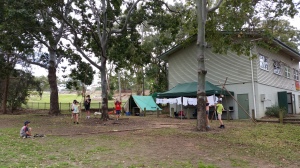 The two patrols we are taking to District camp practiced cooking their service dinner menus together and I was very impressed with their teamwork and the edible nature of the food.  It’s a secret what they made until after next week suffice to say I wish I was getting an invite to either patrols dinner but some other lucky leaders in the District will enjoy that!

On Sunday we learned all about our patrol box gear and how to store it.  Can you see how amazing neat and tidy these are?  Echidna hopes they come back from camp not dissimilar!  We also found out just how much faster these tasks can be completed with small motivators like chocolate 😉 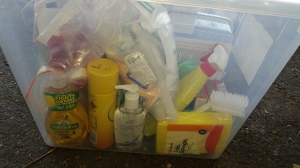 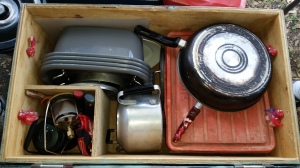 Echidna ran a leaders’ service lunch after all our hard work packing down campsite and packing up gear.

There was a great team effort lead by Komodo (and assisted by Hawkeye) teaching the PLs and APLs to direct and assist their patrols in packing a trailer.  Can you believe we are all packed ready to go a week out from camp?  Just need to do groceries closer to Friday.

We had a rather long closing parade too on account of all the badges completed. Many of the Pioneer level scouts completed their Pioneering Target Badge. Even more exciting we had the presentation of two cords.
Ellie received her long awaited Pioneer Campcraft, Pioneer Badge and Pioneer Cord.

Elliot received his science badge Explorer Campcraft, Explorer badge and Explorer Cord! A huge effort by all and I suspect many more elements of badge work that were taught and practices will be signed off in the coming weeks too.

BRAVO to all! It was a great camp and we are all looking forward to District Camp at Guanaba Creek next weekend J